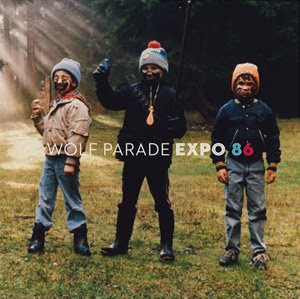 featured today is wolf parade's third full length record, titled "expo 86". this is another example of creative restlessness by montreal based spencer krug and dan boeckner. you might think this unlikely, considering that boeckner has already released two albums under the handsome furs side project, co-fronted with his wife alexei perry.
krug has also since released three albums under his side project, the sunset rubdown. in addition to this he is said to be heavily involved with indie group, swan lake. so amidst all these creative outlets wolf parade has managed to create another perfectly crafted record. the opening track sounds more like the modern lovers spoken loudly over restless drums and is a perfect introduction to eleven tracks that are dis-conjointed, yet in perfect musical unity. this album will walk you through the psyche of wolf parade and although you won't understand it, you will surely like it.