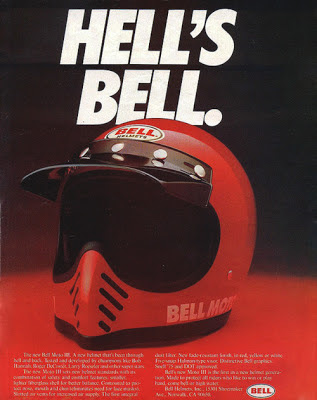 these lids were big in the late seventies/eighties and i remember the older kids at the bike track used to rock the bmx3 which is very similar in design to the moto3. i always wanted one, but instead i was stuck with my brothers hand-me-down helmet looking like a kook.

i saw the moto3 a few years ago in japan and it was like i had instantly travelled back in time to the randburg bmx track where i spent many of my childhood days. if you grew up in the 80's and were into mx or bmx, this helmet is certain to evoke some emotion in you.

that was the moment i decided i have to find one; and so my moto3 journey began… 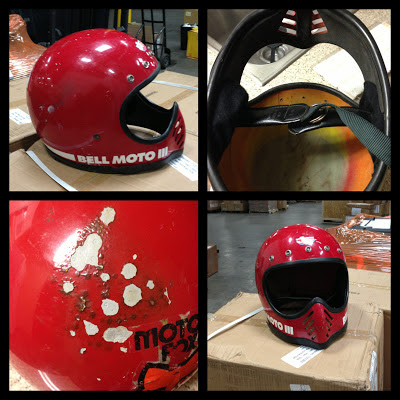 it took me over a year to source this helmet, it wasn’t easy finding one in my size that wasn’t astronomically priced. so when i finally had one it’s safe to say i was pretty fucking stoked.

i thought i paid a lot for mine, but a simple flip through the pages of ebay was more than reassuring. it seems prices for these have surged over the last two years, due to their increasing popularity. i saw one go for 650 usd the other day, with the average price hovering around the 300 usd mark. 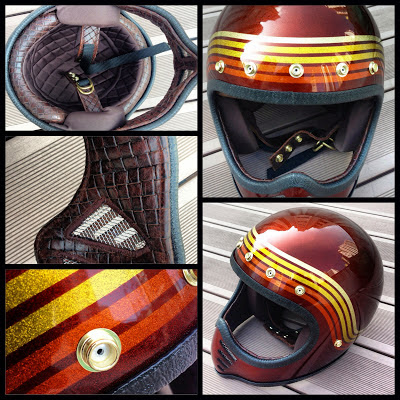 when i travelled to the us last year, it seemed self-explanatory to drop my lid off with scott at chemical candy customs in dallas. i always admired his paint and the clean lines of his artwork; a far cry from the skulls and flames which usually adorn a custom painted helmet.

after scott worked his magic, i had him send the lid to the wonderful billy and rachel davis at hellmutts to have it re-lined. they went at it with a dope new liner made from fabric and basket-weave leather. they also replaced all the snaps/d-rings and made me a custom arthur fulmer style chinstrap from the same material. literally, your own imagination is the only limit when it comes to their level of craftsmanship. 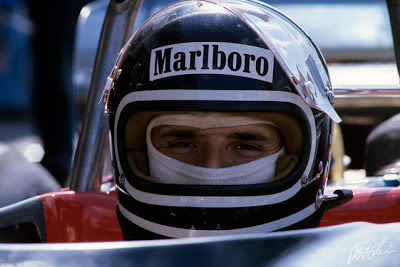 the 1970 bell star is another one of my all-time favourites, it’s such an iconic helmet. launched in 1966 it was the world's first full-face motorsports helmet and quickly earned the admiration and support of the world's top motorsport racers and enthusiasts. many famous drivers such as jacky ickx, jackie stewart, niki lauda, gilles villeneuve, evel knievel and kenny roberts wore the bell star to protect their noggins’.

some of my helmets have been completely restored, some are in the process of restoration and some are just as found. i do restorations myself when i am restoring the lid to its original state and i have them done by others if i want some unique paint or a custom liner.

i am still looking for a 1970 bell moto-star, to me this is the unicorn of vintage helmets.

i regularly update my instagram with my helmets, so check it out.


disclaimer: these helmets are over 40 years old and do not provide protection of a modern standard. all helmets listed here are for display purposes only and should never be worn on public roads.