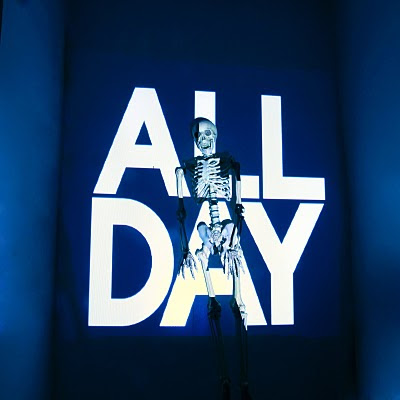 gregg gillis literally broke the internet when his latest album titled, all day was released as a free download on monday the 15th of november. his label, illegal art had to release the album as a free download due to copyright issues. if you're familiar with girl talk's mash-ups, you'll know that this guy samples everything under the sun and having to get the copyrights from all labels must have been borderline impossible. girl talk is a genius and i bet he was born with his hands tied around a magic trackpad and a high-power intel osX mac, running the latest version of ableton. mixing tracks like this is not easy and it was not done with garage band or any run of the mill mixing software. if you don't know what any of this means don't worry, you will love this album nonetheless, albeit you might be a little shocked if its your first girl talk experience. he'll manage to get you dancing to any track and the best part is that not only will your dopamine levels be through the roof, but your feelings of nostalgia will also be tingled... hey! hold on...i know that song, ohhhh oh man its so good!! blogs around the world have already blown up on girl talk, listen to it and you'll be cool to.

here is the scoop from mtv news:
“i was up all night helping to get everything ready for the album, and eventually, i had to turn my phone off and ignore it so i could actually go to sleep,” he laughed. “and when i woke up at 3 p.m., it was, like, complete chaos. it was kind of like the internet had erupted girl talk everywhere.”

“it was already staring to bubble when i went to sleep. … it went up at around 5:30 a.m. eastern time. i actually posted a link on my personal facebook first, and people on there were like, ‘whoa, this is really it?’ ” he laughed. “i think the few kids who had been up all night or the people who don’t have day jobs who happen to be up at 5 in the morning were all kind of stunned by it a little bit.

“and then i announced it on the twitter … and it started blowing up a little bit. you know, the wikipedia page started, and people started listing samples,” he continued. “and again, since i woke up, it’s been insane … just endless messages and so-and-so person wants to talk to you today. … and then, people haven’t been able to download it, because the site has been down — which i’m sorry for — so, yeah, it’s been a crazy-ass day.”

“the big feature of this album is giving samples a little bit more breathing room. … there are segments on the new record that are extremely detailed and cut-up and, you know, 10 samples will go by in 10 seconds, but i feel there’s less of a focus on that compared to previous albums,” he said. “i’m really interested in the rate of change but sticking with the same source material for a bit longer. it’s a little bit more patient, mostly be

cause i’ve spent just about every day working on it, editing it, going over each segment. it’s been a full-time commitment.”

“there are some things, like, [a sample of willow smith's] ‘whip my hair,’ that i added, like, a week ago,” gillis laughed. “the first edit was on october 26, my birthday, and then i spent, like, a week fine-tuning. and there was one part on the album that i was hung up on, which is why we didn’t release it on friday, and then we worked on it over the weekend and kind of finished up yesterday, to be honest. it definitely feels like christmas morning or something, because i’ve been working on this thing for so long and going crazy trying to wrap it up.”